View my Schedule for the event

Workshop An Internet of women by 2020

Activists and development workers shared successes and challenges they have faced over the past decade while trying to address the digital gender gap.  The conversation was hinged on the WSIS+10 review which set new targets for 2020. My reflections on the session and issues that I found interesting and worth carrying forward include:

The workshop was coordinated by the World Intellectual Property Organisation and the International Federation of Film Producers Associations. Its main objective was to understand the complexities of Internet video services  and in general their benefits to sustainable growth and local content production. Speakers included film and TV producers and independent content producers from Africa, Asia, and, Latin America. Participants discussed legislative, regulatory and economic realities and possibilities that could make local content industries significantly sustainable and contribute meaningfully to national and regional Gross Domestic Products, innovation and cultural diversity.

Workshop – Encryption and safety of journalists in digital age

This workshop, which was organised by the United Nations Educational, Scientific and Cultural Organisation (UNESCO), explored privacy and safety of journalists globally. It noted the developments and debates on surveillance and encryption among media stakeholders in the United Nations member states. Presenters emphasised the role that anonymity and encryption play in enabling the protection of privacy and freedom of expression of journalists and the protection of their sources and whistleblowers.

Workshop – Analysing the Causes and Impacts of Internet Shutdowns.

The workshop explored the causes and ground-level impacts of internet shutdowns with a view to uncover the motivations behind the measures, laws and policies that aide them.

First published by the Association for Progressive Communication

The expansion of access to the Internet in Africa is a game of political power and control.

I reached this conclusion as we mapped and analysed the main internet governance issues this past week during the African School of Internet Governance (AfriSIG). It is apparent that Africa’s contribution to the world’s target of connecting yet another billion, largely lies on the shoulders of two main stakeholders – the government and the private sector. Unfortunately, the interests of the two in ensuring access to an open and affordable Internet , in the majority of cases, are not always common. In fact this constant tangent in interests between the two will most likely account for yet another missed opportunity empower millions and transform a continent that has continued to lag behind in terms of development.

In his illustration of access to the internet, David Souter noted the ‘public good’, infrastructure and affordability as the three key issues influencing access. My reflection on the three issues, based on trends in the development of the internet on the continent, allowed me to interact with the power dynamics between the two and how they will continue to breed barriers to connectivity in spite of the continents mobile revolution.

Firstly, the politics of the internet as a public good.

By definition, a public good is a good that is non-excludable, non-rivalrous and which no one makes a profit from. Public goods are predominantly government or state funded through taxes. At present, the internet in Africa remains unevenly distributed and accessed; with a digital divide existing between the urban and rural communities, the urban poor and urban rich and marginalised sections of African societies that include women, the disabled and the youth.

To a larger extent, internet connection on the continent is rooted in and driven by ISP business models that are driven by a primary motive of profit. Take for instance, Zimbabwe where ISPs, have invested in infrastructure and continue to roll out services that do not appeal to nor prioritise rural communities. ISPs becry low consumption sophistication and low income stating that governments should use the Universal Services Fund (USF) to subsidise infrastructural costs and promote use.

But do African governments have the ‘political’ will to ensure, not only equitable access to the internet, but to ensure that it is a secure and open platform that facilitates the exercise of basic human rights and good governance? Given the background where some governments have maintained controls on information, free expression and opinion and continue to repress and violate the traditional media offline, this may be a challenge as the internet offers wider realisation for all three.

To substantiate this assertion, I allude to the current wave of internet shutdowns that the continent continues to experience. Ironically, the shutdowns are occurring in the midst of a clamor for wider access on the continent, but again, this does not come as a surprise. Equally, to speak of transparent, non-discriminatory and competitively neutral utilisation of USF or targeted subsidies to increase universal may be a long shot. Over the years political interference from different government quarters of governments in the use of the USFs as well as disputes over poor or ineffective administration of the fund has been cited in a number of researches. Clearly, it is not enough for a country to just have a USF in place, but there is need for a legal or regulatory framework to drive the utilisation of the fund. Clearly USF policy should complement a market oriented telecommunications sector and incentivise the private sector to see the extension to universal access in Africa as a priority. No prize for guessing who should be in the fore of this conversation.

Lets face it, the prioritisation of broadband for development in the internet governance debates has put African governments are under a lot of pressure. They have responded by the adopting infrastructure sharing in their national ICT policies. At continental level, was the adoption of mutualisation policies following the development of undersea cables that integrated the continent into the international fiber optics connectivity networks. The connection of national backbone to the international networks has in most cases been facilitated through common or jointly constructed infrastructure.

This automatically this means a monopoly of internet infrastructure. Monopoly means network quality, new technologies and controls on access will be determined by and reliant on harmonised infrastructure. So crtitical questions are; How will this impact on market competition of existing ISPs, quality of services and whether it will translate into tangible consumers benefits and promote innovation not only within a national context but continentally?

This question is the reason why I was pleasantly surprised by the under representation of the private sector at the just ended African Internet Governance Forum (AfIGF), held in Durban South Africa. Who is having the conversation on access? What we need at this point is a regional conversation on the possibilities of collaboration of internet service providers, and in particular the mobile network operators, for collective increase in coverage and access to the internet on the continent.

Lastly is the issue of affordability.

As Research ICT Africa’s Chenai Chair presented an analysis of pricing of monthly mobile broadband data across 28 African countries in one of the AfriSIG sessions, it became even clearer that a regional standard must be set on the pricing of data. Statistics show an unbelievable disparity in the pricing of data with the least cost recorded in Tanzania, ninety cents per gig and more expensive costs in countries like Zimbabwe and Swaziland where a gig would cost slightly over thirty dollars monthly. The most expensive country, South Sudan, charges ninety dollars per gigabyte for a month. So when you look at the costs of mobile data on the continent, it is apparent that they are way above what the average African can afford. So now you see why we are conflicted on the issue of zero-rated services on the continent? Facebook has signed up almost half of Africa on its free internet service, is testing solar-powered drones and developing a satellite to beam internet access to Africa’s most remote communities. Soon Facebook will define the internet in Africa and this will undoubtedly continue to account for losses by MNO’s for paid voice and text services. Why does this not move African governments? What will be the cost of free Internet services in the long run? The private sector may need to push a little harder for frank discussions on policy or regulation on such services and consensus on how we can ensure affordability on the continent, while promoting our own brands and markets. 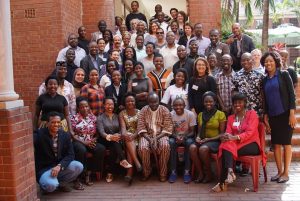